Only 4 days after hurricane Irma had passed I was able to fly to Puerto Plata and luckily the damage was not as bad as expected. In particular, many trees were blown over, wooden houses vanished and also the beaches affected.
I got off to a good start and the first 10 days passed without any problems.

Judith and Roberto regularly picked me up from the Casa Marina hotel to go to Colegio Asher. Since June, they have heard that Colegio Asher belongs to the top 25 schools of the DR. 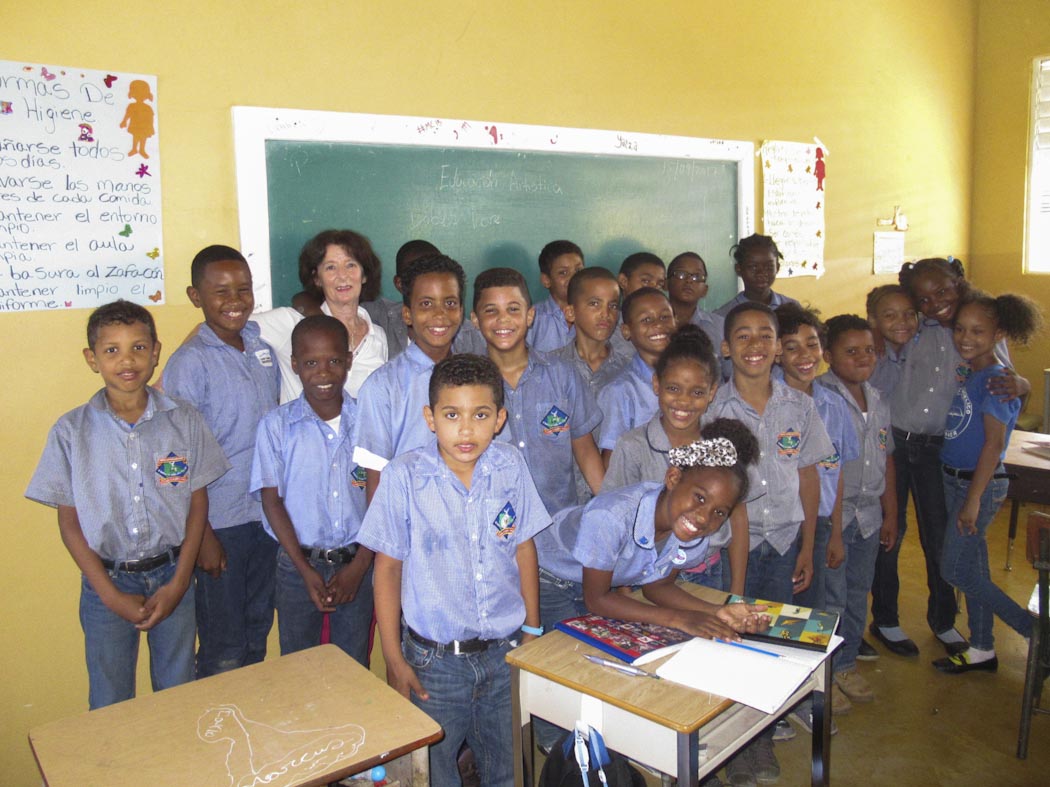 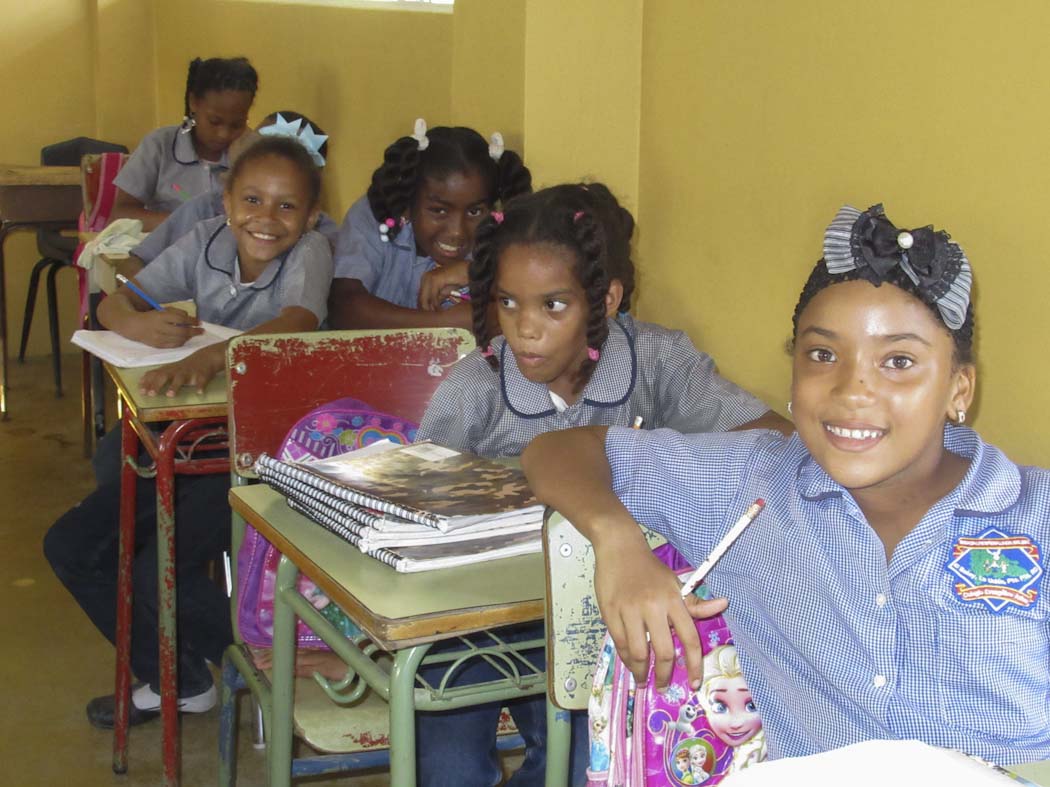 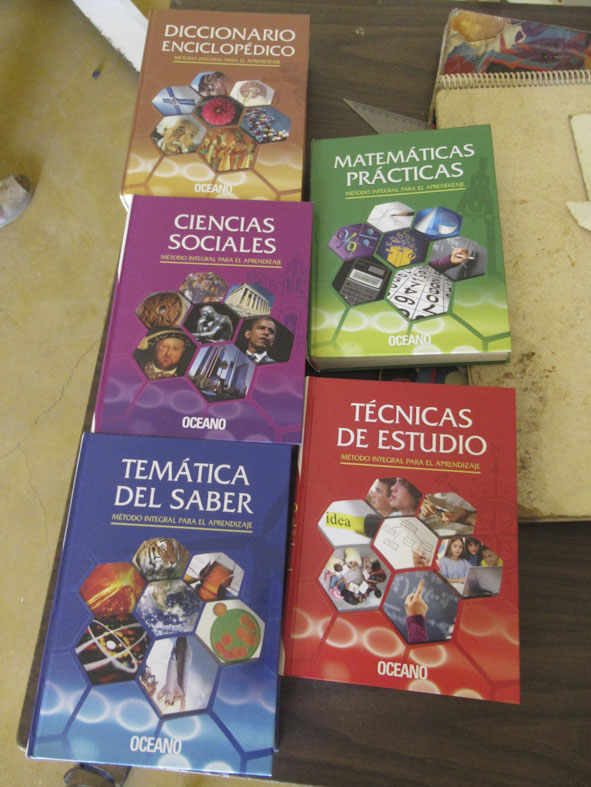 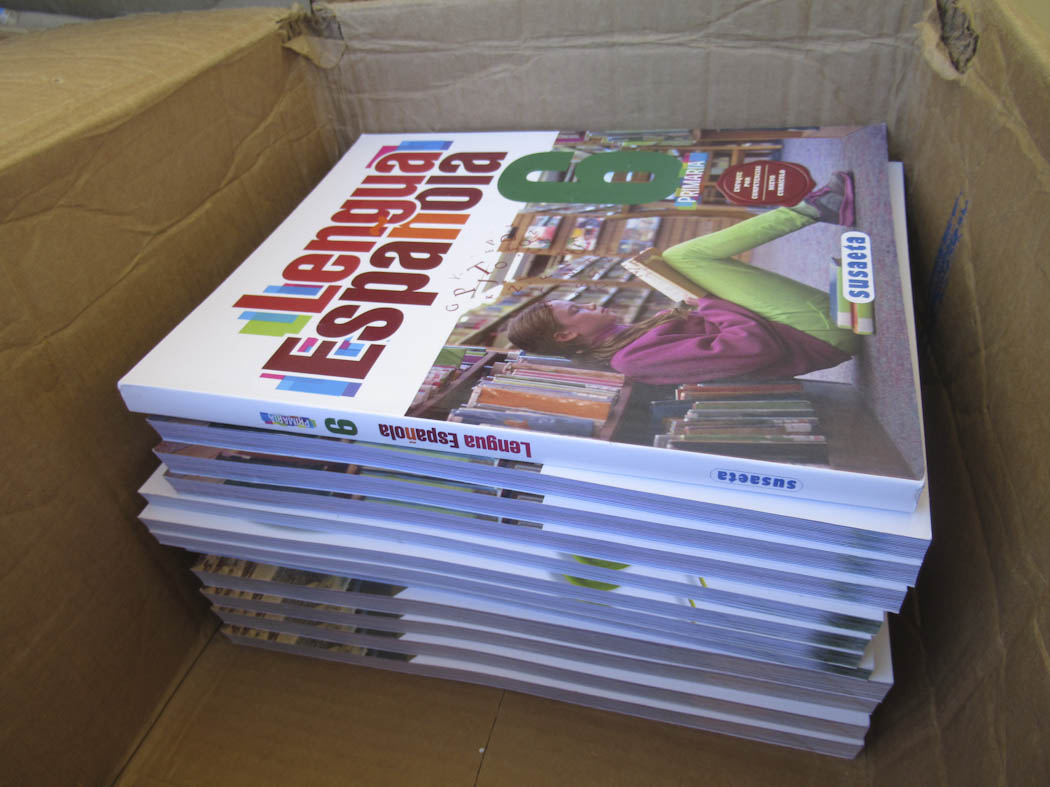 The library bookcases we bought previously were still quite empty a year ago, but are becoming more and more filled. We bought books and other school materials during my stay. The facilities where physics and chemistry are going to be taught are now also supplied with the necessary equipment by our financial contributions. I saw many happy faces (especially during meal time!) and it is notably that the children can be a real child here. Of course, much needs to be learned, but at school they are also feel free from the serious problems they face at home and they receive the care that is often lacking at home.

The two large murals, which the Dutch Foundation Color4kids founded on one of the buildings of the school in May, are really beautiful. The rights of the child and the historical story pictured are regularly taught and they speak so much more to imagination.

Even before Hurricane Maria, I managed to go to Camu. Dave was so kind to bring me there with a suitcase full of stuff. Due to the floods in November 2016, I had not been to Camu for more than a year, so I had to catch up. Fortunately, all of the vouchers for school uniforms were by the Sosua Kids As. brought to Camu in August, so all children could go to school. I once again had a pile of Fox Productions T-shirts for the kids, and in addition I provided them with pens etc.. Belgica, our Camu contact, gave me all kinds of beautiful fruit, letters and drawings from parents and children with gratitude for what we do there. 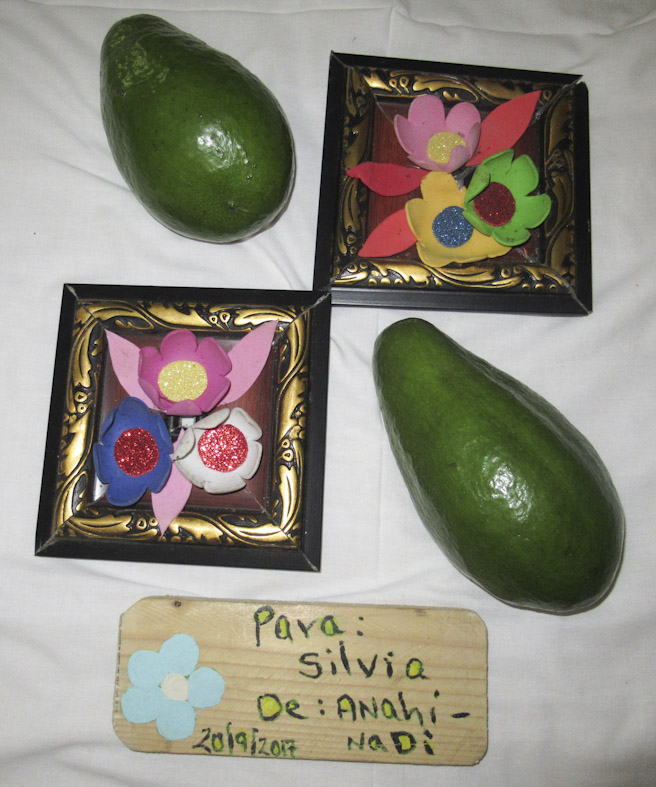 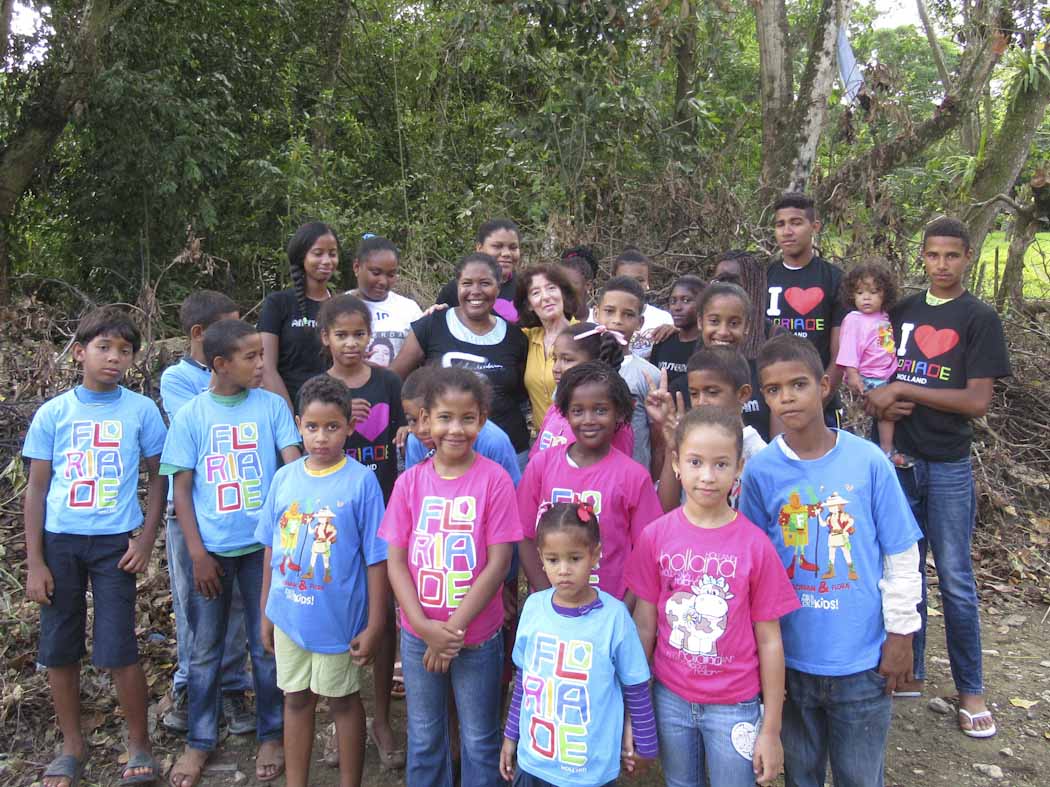 Hurricane Maria was announced. After the disastrous consequences on Puerto Rico, everyone kept in mind that it could also go that way. Windows were sealed off, boats were taken from the water, school buildings partially cleared to create a shelter for those in need.

Public life came to a halt and of course the schools were closed. The Defensa Civil claimed, on behalf of the government, again one of the buildings of the Colegio Asher, for shelter. Also in the hotel the Defensa Civil checked for the hurricane daily. The lower floors, where I had a room, were evacuated in case of possible floods. I got another room, higher situated and away from the sea. Hurricane Maria slowed down to category 3. That is fierce but fortunately not a category 5. The hotel's script was perfect, partly thanks to the previous Hurricane Irma and we were well informed. For eight hours Maria tortured us and everyone had to keep inside. There was now more water damage than after Irma, but less wind damage, because the weaker trees were already felt and the weak roofs had already blown away. Once again, many wooden houses had been vanished, but no victims fell. The Dominicans were sincerely grateful that it once again ended so well and said "the rest we just build again".

During a small meeting with board members of the Sosua Kids As. our foundation was once again thanked for the financial support we give each year to buy school uniforms. 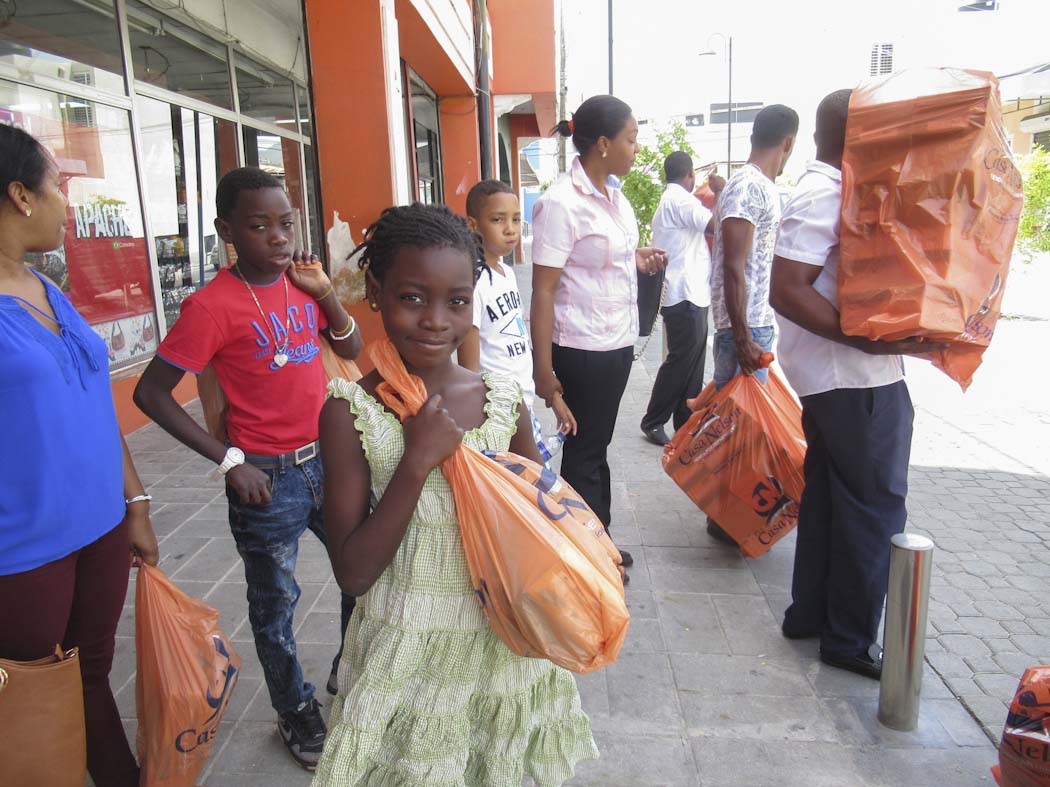 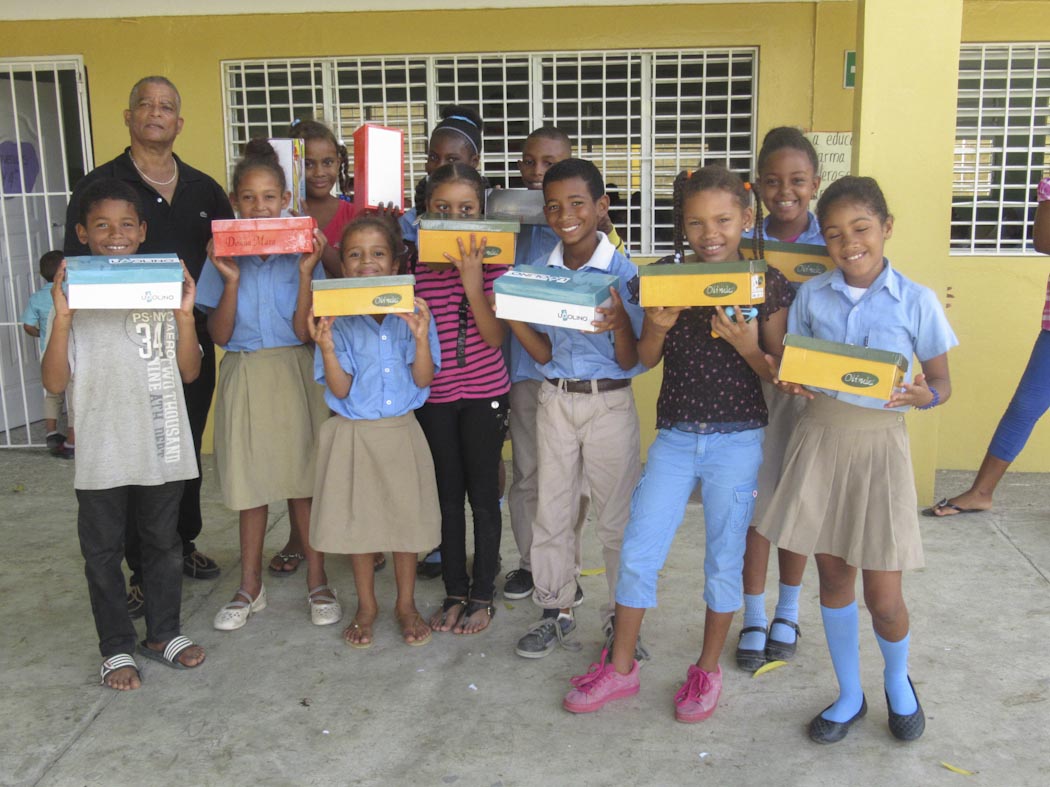 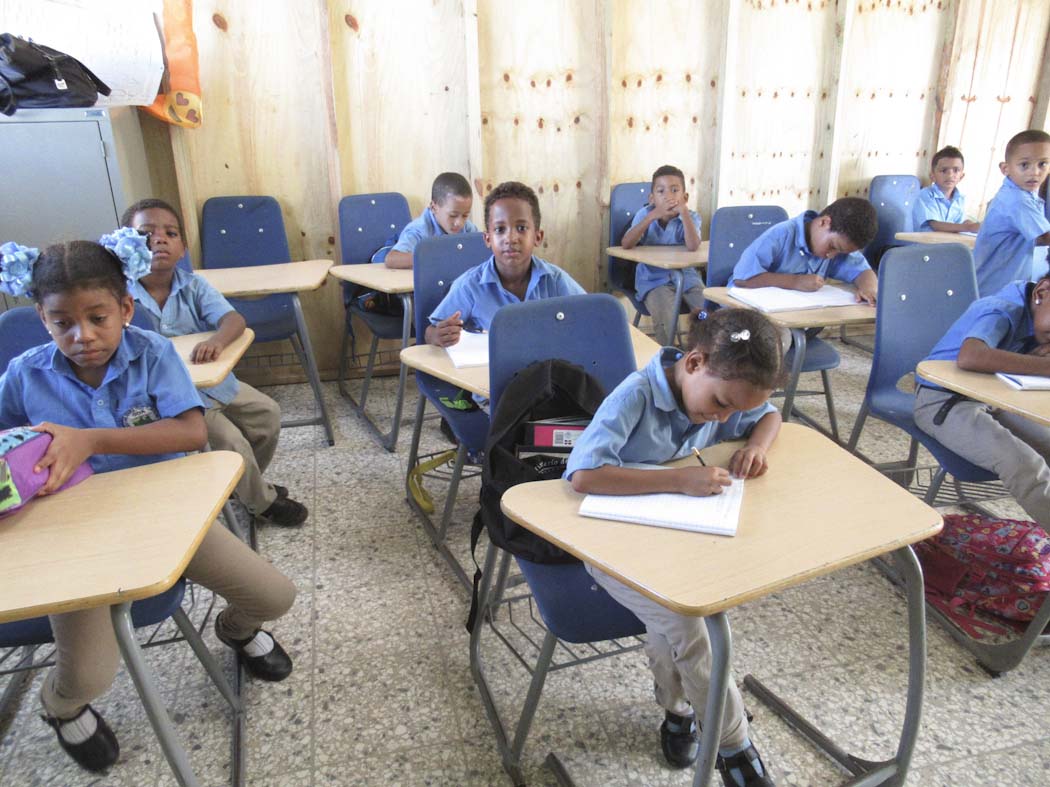 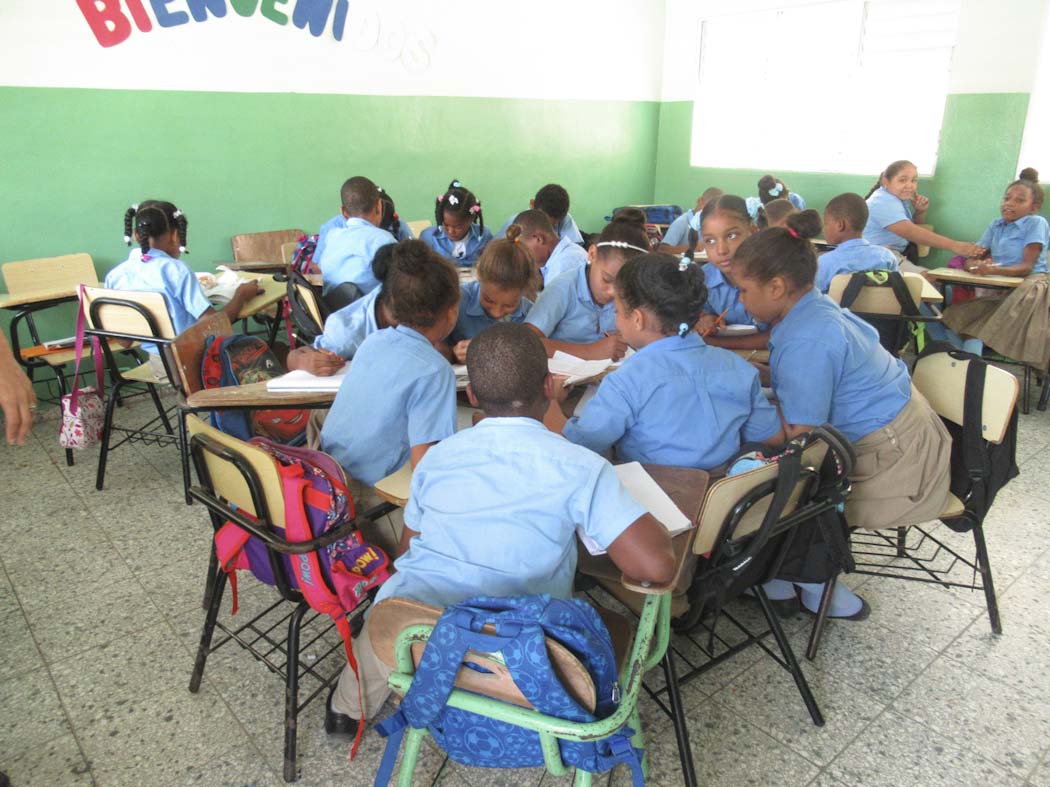 Although I was delayed by the hurricane, other children had to be provided with missing pieces of the required school uniforms before I left. I had asked Teo to draw up a list of what was missing for the poorest children. Armed with 2 lists, we went to Puerto Plata, where we bought a lot of black shoes, blue shirts, beige trousers and skirts. Once in a while a child gets a school uniform from the government but, for example, the shoes are missing. We will then top up on the uniform. On Friday, before my departure on Monday, we were able to share the purchased items at a school, with mainly children from the countryside. Many children were very timid and soon disappeared with the items, under a whispered thanks.

As a cherry on the cake I received news that the Colegio Asher had been given permission by the Ministry of Education to give higher education, the so-called High School, just before I returned to the Netherlands. The school now meets all the requirements and our foundation has made an important contribution by our support to the realization of the library and the laboratory. This permission has come much sooner than we hoped for.