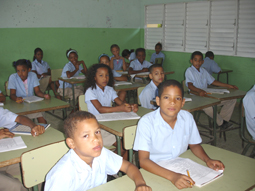 Paying for school uniforms, shoes and food for state schools via the Sosua Kids Organisation. This involves practical support, not just giving money. The organisation's activities focus on distributing the funds and conducting on-site checks. It is led by Americans, Canadians and Dominicans, among others, all of whom are volunteers. There are also checks that the children actually go to school, and on their results.
The total costs amount to around 50 euros a year for each child.
A few promising children are also provided with the opportunity to go on to study at university. 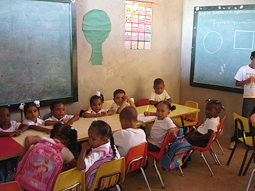 Financial assistance, contributing to furnishing costs, teachers? wages, clothes and food for a private initiative, the Colegio Evangelico Asher.
In 2006, Judith and Roberto Terrero, a Christian Dominican couple set up the Colegio Evangelico Asher, a private school for children who previously lived on a rubbish dump. These children cannot go to the state schools. The government contributes nothing to their school, because it is not a state school. The children are given a warm meal each day at school.
In September 2008, some 200 children will be attending this school. For a year commencing in September 2006, lack of money meant that lessons were given in a large shed with a leaky roof, but a better location was rented in September 2007. The landlord does not meet his obligations, however, and there has been such an increase in crime recently that the children are in serious danger at that location. Therefore, there is currently a search for a better and safer location for the school in the neighbourhood.During the spring, Judith en Roberto Terrero set up a foundation for the school called "Fundacion Evangelico Asher". This foundation tried to buy a small building for the school before the new school year started in September 2008. There was no money for this, and Judith en Roberto Terrero organised a benefit concert in Sosúa to try to raise some money. The purchase finally did not go ahead, and it turned out that the freehold of the ground could not be transferred.

In February 2012, thanks to a wealthy Canadian, a piece of land in La Union was purchased by the Asher Foundation for the Colegio Asher.
Meanwhile, with the help of a church community in Canada, the construction of a new school building for the Colegio Asher has been started on this land. Our foundation will later contribute to the costs for new equipment. In addition to basic education, the school will provide technical schooling.