Sosúa is a small city in the north of the Dominican Republic, which occupies the eastern side of the Caribbean island of Hispaniola. Haiti is the western side of the island that lies to the south east of Cuba. In spite of its abundance of rich natural resources, the Dominican Republic still has a prevailing problem of acute poverty due to corruption and the absence of structure in many regions. 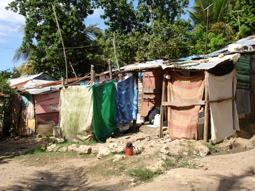 There is an enormous contrast between poor and rich and the poor people’s life expectancy is not high.
Street prostitution is rife everywhere, and numerous Haitian refugee children live on rubbish dumps. Many poor children cannot go to school, even though there is compulsory education. However, to be allowed to go to school, a child must have a school uniform, shoes and learning materials that are all paid for by their family. Poor families, single parents and orphans cannot afford this. Moreover, only children with complete birth certificates are allowed to go to the state schools.Partly due to the lack of the required papers, many children from single-parent households, orphans and refugees depend on being taken into facilities provided by private initiatives.

Our project, therefore, focuses on these vulnerable groups in the Dominican Republic and the refugees from Haiti who live there.