It was very hot in May and many normal rains stayed away. There had already been a long drought and besides many, lengthy power cuts, water will also now only be supplied in dribs and drabs to the population. The tourist resorts, however, notice nothing of this. During one of my visits together with Judith and Roberto to the Colegio Asher, for the first time I saw the inside of the big yellow building, which is also visible from the road from Sosúa to Puerto Plata. This building was built by the Canadian Samaritans, and they provide it free of charge to the Colegio. The school itself must pay for everything else. The building contains one great big room for up to 400 pupils and is also multifunctional. The current number of 240 pupils can therefore still increase considerably. The adjacent second building, which is still under construction, contains many classrooms and will hopefully be completed in August.

Anyone who has not visited the locations of the Colegio Asher during the past 10 years will not be able to imagine, after the move, how miserable all the previous conditions for learning and working were at the school.

Together, we also went to Puerto Plata to buy various learning materials for the new school year. 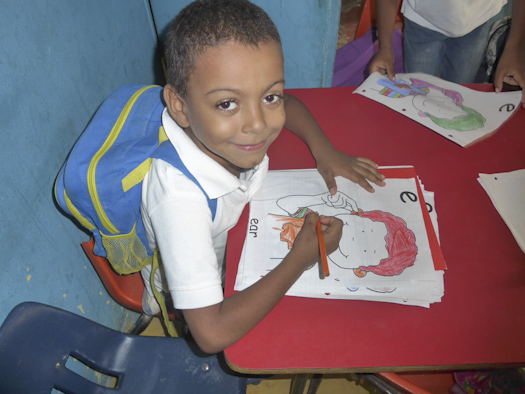 By chance, during a ride in the so-called public taxi, I got into a vehicle in which the backseat was packed with 6 deaf children. The driver, very sympathetic for these children, ferries these children each day to and from the school for the deaf in Puerto Plata and takes them all the way home to various places. He does this partly at his own expense. He also sometimes buys water for them with his own money, because they are often so thirsty, he said. I gave him some extra money for the ride and said "for the next bottles of water." Then he brought me all the way to the hotel Casa Marina, instead of to the taxi rank on the main road.

Due to illness of Dave, there was no longer an opportunity to go to Camu. That's not so bad, because in November this can still happen. It was indeed a surprise that I got drawings etc. from the children of Camu, which were even delivered to the hotel. Sometimes the easiest things go wrong and the hardest go well. As every year there, partly from our substantial contribution, school uniforms, etc. will again be purchased. The volunteers of the Sosua Kids Association will again work hard in July on this, by means of issuing the vouchers. In addition, during my visit, our foundation again made school uniforms and accessories available for 6 children in Puerto Plata, who until now could not attend school. Tania selected these children. Thus there is a boy, whose mother is drug addicted and walks the streets (as a prostitute). He often sleeps with neighbours if his mother is gone for the night, gets some food there and roams the streets. From now on he can therefore go to school each day and get to eat there. For children of the Colegio Asher in El Batey de la Union, the children of the orphanage in Sosúa and also those of the afternoon school in Puerto Plata, I could again bring many t- shirts, which we always get free from Fox Productions in Weesp, and in addition we also gave all kinds of office supplies, paper, pens, notebooks, etc., originating from a large package donated by Staples. This again made for a lot of happy children.